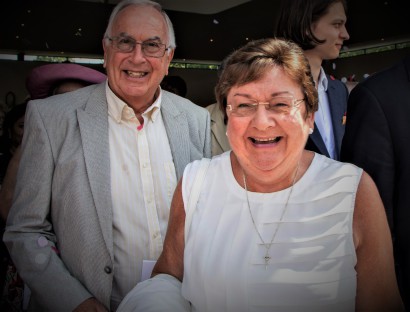 Hello - we are Geoff and Gina Poulter and would like to tell you a little of our story of faith that has brought us to where we are today.

Gina was born into a Catholic family whereas Geoff became a Christian when he joined the Catholic Church at the age of 18. We are married with four daughters, all of whom are married. In addition we have seven delightful grandchildren.

Gina is a trained Christian Counsellor, Elijah House trained Prayer Minister and an a fully trained and experienced Spiritual Director. Geoff is also a trained Elijah House Prayer minister and has a degree in Divinity and a Post Graduate Certificate in Theology. He has worked on national bodies within the Church on both Healing and Scripture as well as being a Board member of a variety of Christian  companies and charities.

Both Geoff asnd Gina have been accredited by' 'Heart of the Father Ministries' in the USA to mnister their  'Unbound Prayer and Deliverance Ministry',

We have been in active ministry in the Church for over forty years in a variety of roles. It all started when we went on a Marriage Encounter Weekend in 1976 - that was our first major conversion experience when we encountered Jesus as our living Lord and also heard a call to serve Him as a couple. This is something we have sought to do ever since. Ultimately, we were selected as the National Leadership Couple [we worked alongside Fr Frank O'Sullivan] for Worldwide Marriage Encounter in England and Wales as well as being on the European Secretariate for the movement. We still have a passion for working with married couples and those preparing for marriage.

The Gifts of the Holy Spirit Awakened

When this term of service was over we took on a number of leadership roles in our local parish and also headed up the Parish Team. Over thirty years ago we ended up attending a Life in the Spirit Seminar - that resulted in our second major conversion experience as we invited the Holy Spirit to enter deeper into our lives and He did just that. What an experience, privilege and challenge it was to have the Gifts of the Spirit awakened in us. Since this time we have been active in the Healing and Prophetic ministry.

The Ecstasy and the Agony

At this point in our walk with the Lord we experienced the ecstasy but then the agony. A growing frustration was building up within us - despite our heartfelt desire to minister in the power of the Holy Spirit there was a lack of opportunity in our own Church. Also we had a deep hunger to both learn more and experience more of God's promises. It was Mass in our parish church on a Sunday morning then to the Pioneer Church in Cobham in the evening. Here we found fellowship, worship and teaching. Crunch time was coming for us. We had decided with a great sadness that we had to go where we were being fed and leave the Catholic Church. Just as we were about to make this public statement Geoff had an open vision which simultaneously was confirmed to Gina through a word from the Lord. The essence of God's message to us was simply 'Stay and help put My heart back into My Church'. - Thats exactly what we have been faithfully trying to do since that point in time.

About a year or so later we joined a Catholic Charismatic lay community where we stayed for seven years and for the last four were part of the Leadership Team. However, we sensed that the Lord was calling us out of that community which was a tough decision - but in obedience we did leave. We then waited on the Lord - but not for long. For twelve years we were the Directors of The Catholic Bible School based near Chichester in West Sussex until we retired from there in  2014 We have been in full time Christian ministry since 2001

This has given us a wonderful opportunity to serve the Lord, the Church [in its widest sense] and to use the Gifts of the Spirit and the talents that the Lord has so generously made available to us. It is a privilege and a joy to see people lives’ being changed.

In September 2015 it was a great surprise and an even  greater  honour for each of us   to be awarded individually the important Papal medal, Pro Ecclesia et Pontifice (for the Church and the Pope).  This award is sometimes known as the ‘Cross of Honour’ and is the highest medal awarded by the Pope to both clergy and laity. It was a recognition by the Holy See of "their contribution over the years to the study of Sacred Scripture and the work of Evangelisation within the Catholic Church, alongside their involvement as Directors of the Catholic Bible School, members of Catholic Charismatic Renewal and Marriage Encounter in the Church".

Ministering to the Universal Church

Alongside of this we have maintained and developed our itinerant ministry which has taken us to various parts of England but also Scotland, Germany, Malta, Denmark and Slovakia.

Our web-page on 'Courses and Programme' will give you a feel for the areas that we minister in.